The Hellraiser III soundtrack was somewhat of a departure from the orchestral-only soundtracks of the first two films, reflecting the Americanisation of the franchise for the MTV generation. Once he had been invited back on board at the conclusion of the film's shoot, Clive helped the movie's promotion by directing a music video for the title track of the soundtrack, 'Hellraiser' performed by Motorhead.
In the video, Pinhead plays Motorhead's front man in a poker game for Lemmy's band. In an seemingly unlikely turn of events, Lemmy wins, whereupon he belches the movie's theme song to an audience of damned souls which Entertainment Weekly unkindly described as looking 'a lot like a typical crowd at a Motorhead show'... 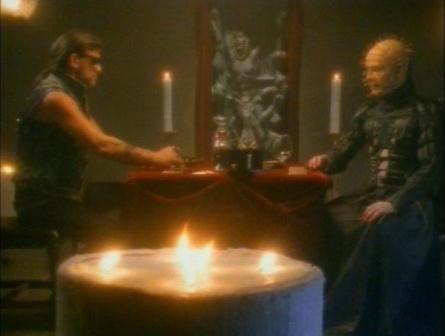 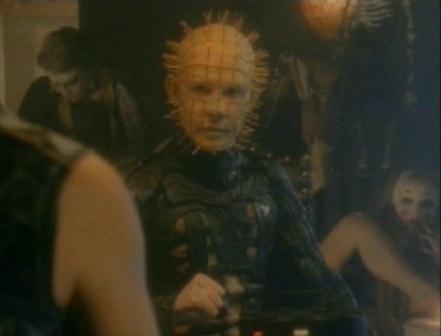 We open on Motorhead's performance, set a large, cavernous space. Dante-esque, dimly lit with pools of light on the band members and their instruments. As the camera moves around the space, various creatures are revealed, oily bodies shining through their ragged bits of clothing, prosthetic pieces (a claw, a beak etc.,) and bandages, stylized make-up all showing that they are THE DAMNED. All of this is shot in shadowy black and white. We also see Props from "Hellraiser 3" (the baby, signage, etc.), which become match dissolves to footage from the film itself.

Back in our black and white cavern a roadie sits in a large Overstuffed chair toward the back of the space, smoking, watching the band's performance. Suddenly light streams in when a door crashes open. We switch to color as Pinhead makes his grand entrance, rim-lit, a delicate presence. The demons begin to writhe madly to the music. The band's performance builds as Pinhead moves across the floor, throwing the roadie out of his chair and out of frame. Pinhead takes the seat and gulps virgin's blood from smoking cup. From Pinhead's point of view we watch the band.

We cut to a scene of Lemmy and Pinhead in two chairs at a gaming table. Intercutting with performance footage and Hellraiser III footage, we see Lemmy and Pinhead playing cards, drinking, Serious competitors having fun. The demons writhe behind Pinhead, the band stands behind Lemmy as the tension builds between the two. 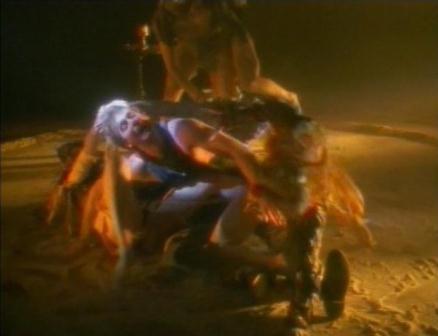 [On Pinhead not having a singing role...] "I wouldn't want to hear this character's voice."

"I just did a Motorhead video - Motorhead versus Pinhead! And Doug was playing cards with Lemmy. It was a one-day shoot - seventeen hours - and towards the end he [Doug] came in and everybody was getting rather reverential. It was like, 'The Lord of Hell is here'. The image carries a kind of potency. It's almost impossible to shoot Pinhead and not have it look good. It's one of those images - very, very cold!"

Opening The (Puzzle) Box Of Delights 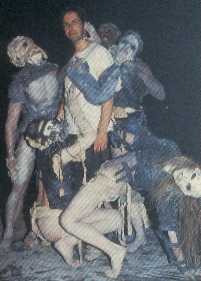 Doug Bradley: "Ozzy wrote the Hellraiser III song, but Lemmy sang it. I play cards in the music video with Lemmy and, of course, Lemmy plays the ace of spades."

An Eviscerator And A Gentleman

By Patricia MacCormack, Terrorizer, No 126, December 2004

Doug Bradley: "The card game finished with me getting the Ace of Spades, so the idea is that Lemmy wins the game but at the price of losing his soul. But that was funny, when we were playing that card game there was a decanter on the table, just as a prop, and Lemmy had a word with one of his people, the decanter disappeared but it came back again full of amber liquid which Lemmy proceeded to drink his way through while we shot that scene, like you and I would drink orange juice, while the dark pope of Hell sat on the other side of the table demurely sipping Evian water...""