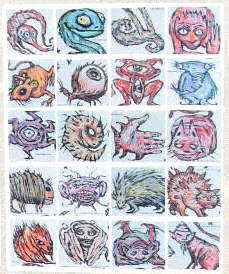 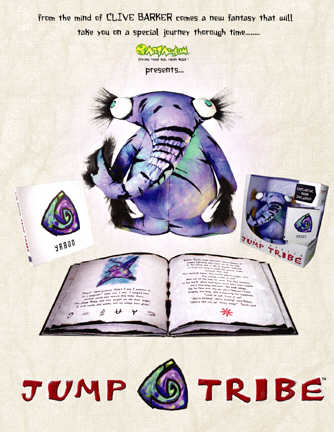 Ahead of summer 2005's San Diego ComicCon, Art Asylum announced their upcoming collaboration with Clive on a series of 'plushes' - the Jump Tribe. Based on a huge, five-canvas-wide painting by Clive - known as The Bestiary - of 240 miniature creatures, each 'Jumper' has been named by Clive and will be accompanied by a short story that will stand alone, yet can sit alongside the other stories to create one larger narrative.

An initial series of four Jumpers (one bad guy and three good) was showcased at July 2005's Comic Con in San Diego where Clive took part in the launch with a slide-show, panel and Q&A session and suggested that the Jump Tribe would find additional audiences in film and also on TV.
Following his appearance as a Comic Con exclusive, the first Jump Tribe figure planned to hit the shelves was Yaboo - who came complete with his own book, written and illustrated by Clive...
Figures.com reported from the 2005 Fall Toy Fair with the following great images of Yaboo and Kungu Nah, who formed this 'first wave' of Jumpers: 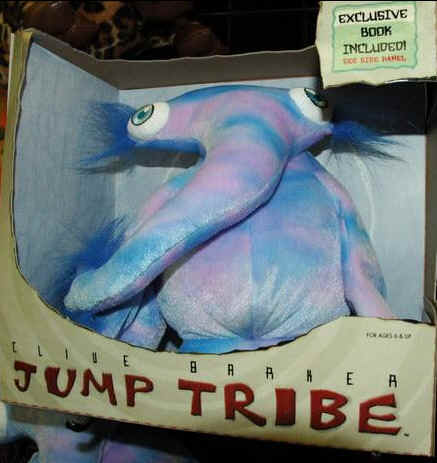 To accompany Yaboo and Kungu Nah, the remaining two characters were Billum (larvae) and Twoth (cat).
At the 2006 Toy Fair in New York, Art Asylum announced revised street dates for Jump Tribe - with the first wave planned for March 2006 and the second wave following in July. Unfortunately, the March release did not materialise, nor did their dedicated Jump Tribe site and Art Asylum have not, as yet, announced a rescheduled date.
Be sure to keep your eyes peeled - a very small number of these first four have been available in the UK, Australia and US since then, but you will need luck and persistence to track them down... 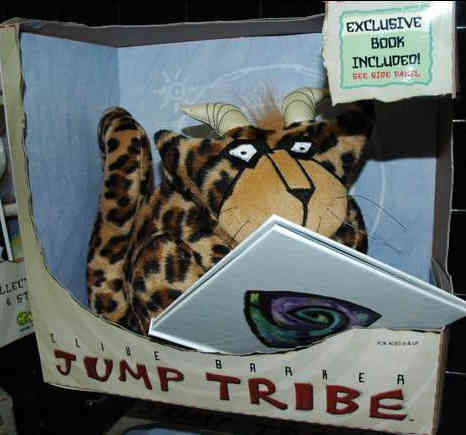 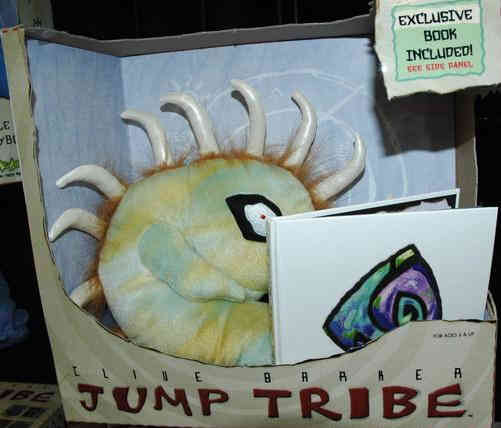 "I'm creating the stories to go with a series of what are called 'plushies', characters called The Jump Tribe of which I've designed 240 of them - it's a company called Art Asylum and they produce toys for kids and they call the toys plushies; soft toys, and I had painted 240 characters on five canvases... this is The Bestiary that I was working on, and the guy came round and said, 'Could we have that?' and I said, 'What would you do with it?' and he said, 'Well, we'd make a world around it, we'll produce plushies for all these characters,' and I said, 'You're on - as long as I can write the stories to go with each of the characters.' So at Comic Con in San Diego this Summer, we will unveil the first four Jump Tribes - Jumpers, as we call them - three good guys and a bad guy and the four stories that go with them and a fine time will be had by all.
"It's curious, even as I was painting The Bestiary I was wondering, 'Why am I doing this?' I do think our fates are sort of pre-ordained in some measure and I couldn't figure out when I was doing this - Why? Why? Why?... and I did actually name them all and of course Adam Unger, the guy who bought them for Art Asylum, said, 'What are their names?' and I sent the names over and he was kind of gobsmacked! It's actually been really fun because the thing about this and the Art Asylum people, they're really nice, fun people, is that this moves at speed. Books move slowly, movies move even more slowly, even my paintings - although they seem to be produced quickly, do not seem to me to be produced quickly - and it's actually fun to make a painting and next see a beautiful sketch of what the toy will be and the next time see a toy! It's really fun and so I've written three of the stories and one to come of those first four. I don't think we'll ever do 240, but we will build a substantial world if people enjoy these characters.
"The stories are certainly aimed that way [at kids], always with a touch of something that hopefully an adult would have fun with. The stories are 1,500 words long, very short, but if they're all added together in a fashion that I've learnt from Tortured Souls, they will make one huge story."

The Lazarus Muse: Nights Of Magic, Days Of Gore

"Our idea is that we'll put with each of the toys, figures - and sometimes they'll be tiny, right? Sometimes they'll be plushies and we'll have as many forms as we want - I will always write a short story to go with each one of them. And when you put all the short stories together, 240 stories, each of the stories is about 1,500 words - do the math - we end up with about 325,000 words of Jump Tribe in pieces, which kind of appeals to me. It's like some three-dimensional jigsaw; it's like that game that Spock used to play, you know? You remember? Like he used to play? Putting all these pieces together one by one...
"I think it's important to see; this is my approach to it, that this is a sandbox for us all to play in. There are some projects which I generate which I feel very possessive of and then there are some - particularly when I'm working with guys like this - where I think, look, this should be fun, we need to play here, we need to be friends here... I think if it isn't fun, if it isn't something that everybody can play in - that's why I said... give me six titles, and I sent out, what, two dozen names? And you chose six names... That's why I like these guys - you know, we don't even have a contract - this is something really cool!"

[re the Jump Tribe] "They jump through holes, they jump through dimensions... By writing stories about the good, the bad and the ugly, we begin to create sub tribes. Wacky and weird can be loving and likable. That's one of the reasons I love playing with the Jump Tribe stories. I over think things - it's about the joy of the creation.
"I thoroughly enjoy writing for a younger audience, when I look at these canvases, there are 240 of these guys. The best illustrations are the ones that go on in your head - to me that's the best thing about this kind of storytelling. It's a place to take refuge from a world."

The Destiny Of Clive Barker

"Well, there are going to be four in the first wave; the Comic Con thing was a special. The idea was that the one that came out at Comic Con was specifically for Comic Con and it's a sort of experimental vehicle; it's very fun but, it's an experimental vehicle. I think we will have got things a little bit smoother by the time we get to the second one which will, in truth, be the first of the real, commercial run. For instance, we put it - the one for Comic Con - in a white box simply because we hadn't even begun to think about packaging by the time that came around, which is nicely minimalist, but you know is it going to work in a store? We sold most of them and there were thousands of them, and they went to - the youngest of the purchasers was nine months old! And she purchased it by just stealing it off the display as her mother walked by and then her mother coming back and saying, 'Excuse me, how much is this? She won't give it back!' By that time, every inch of Yaboo had been sucked to pieces, so there wasn't much chance of reviving it! It was very sweet, really.
"[At Comic Con] we only had Yaboo and we had a couple of really very early, early passes of the others... but to my mind, they're crude first starts. The fun is watching - because there are 240 of these designs - watching people decide, because we took the paintings down there, watching people decide which is their favourite is almost like a Rorshach test! Do they like the aggressive ones that are all teeth, or do they like the ones that look like pale little parchment-coloured penguins? Very fun, very fun."

Rummaging Through The Toybox: Plushes, Plagues and Plaudits

"[Art Asylum] wanted to do something together and I said, 'You know, this is going to sound weird, but... I've just painted five canvases with a total of 240 animals in them.' It was true, because I had divided the canvases so that they were like little boxes, and I painted 240 things. It was kind of just an exercise to see how much diversity I could create. They said, 'How many of these can we have?' I said, 'How many do you want?' They said, 'Twenty? Sixty?' I called them the following day and said, 'You know, this is dumb. You should just take them all.' And that's where we are. We're making toys, and I'm creating little stories for them. It's a blast!"

Visions In Paint And Celluloid

Morpheus : "First up here - NO HELLRAISER MINIMATES!
"It ain't Minimates based on Clive's movies - its a new kid property that we are developing WITH Clive TOGETHER!
"So get ready for the excitement on this as we finalize the plans!"

Adam Unger : "We came together to make something different; we wanted to bring something a little different from both sides, from Art Asylum and Clive, to show you a little diversity in both companies, in both creative visionaries here and... we're excited to bring this to you. We think it's something brand new, we think it's a fantasy world for people to come to, for people to get away from the tough times."

Digger : "I think the unique problem with Jump Tribe was that we had to find a way to make soft product out of it. And when you look at it, you know there's a lot of love in these paintings, you can see and there's also this kind of phallic-tripod-larvae as well, which is going to be hard to sell at Toys 'R' Us..!
"So we had to go through all the characters and see - I guess we started with fifty? We've tried to find the characters that have the most, I guess, appeal as soft toys... Yaboo, which is the lead character, the elephant, that we have probably had the most commercial appeal and the most kid appeal." 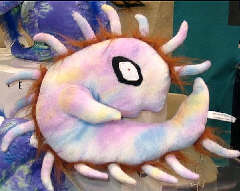 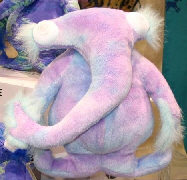