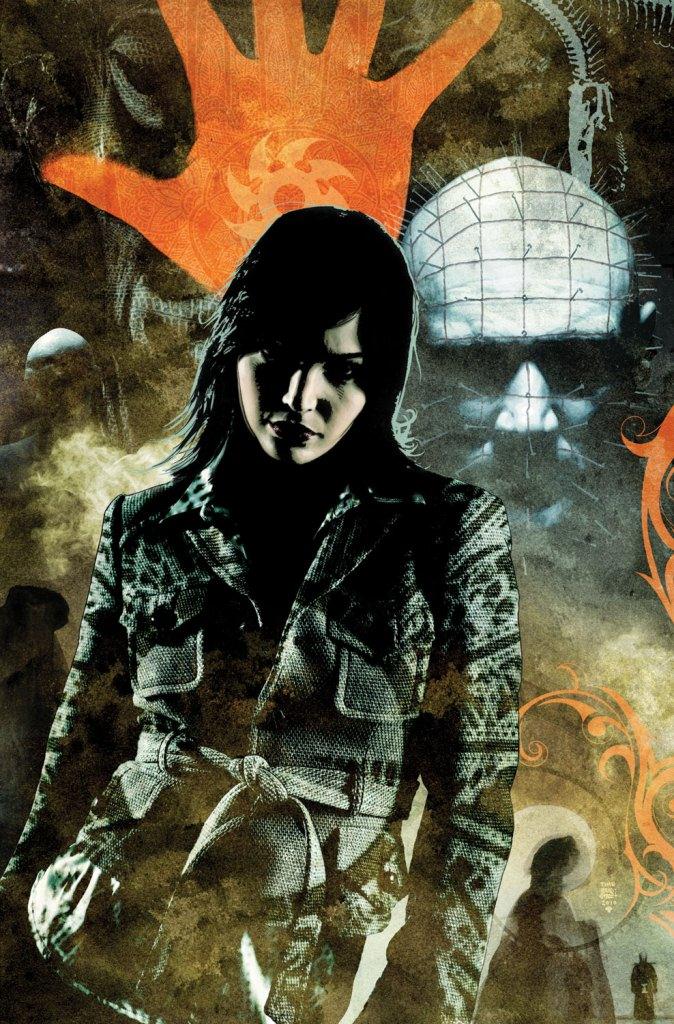 An exclusive here at Revelations - the artwork for Cover C of Issue 2 by Tim Bradstreet!

At the Tolling of a Bell
Free Prelude Comic - Click the cover below! 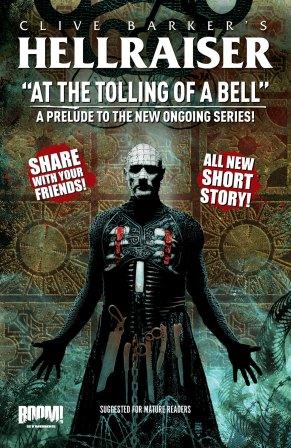 "One of the greatest horror franchises of all time returns, now under the control of its original creator! Clive Barker has touched Hellraiser only twice: once to write The Hellbound Heart, and once more to write and direct the original Hellraiser film. Now witness Barker's long-awaited return to tell a new chapter in the series' official continuity - a trajectory that will forever change the Cenobites... and Pinhead! So prepare your soul for an epic journey into horror from one of the medium's greatest voices, and starring one of the medium's greatest characters, in an unforgettable new chapter of Hellraiser."

Click on the cover above for a free downloadable 'Prelude to Hellraiser', set ahead of events in the first issue, then read on for our exclusive chat with co-writer, Chris Monfette, giving us an insight into the challenges and rewards of interpreting Hellraiser...

A Revelatory Interview with Chris Monfette

Revelations : "If we can jump back a short while, to your work on Seduth, what did you take from that experience that guided your approach to showing Clive your outline for Hellraiser?"

Chris Monfette : "Seduth felt a little like climbing Everest before you'd even hiked the foothills, or swimming the channel before you'd mastered the deep end of the pool. It was my first professional comic gig, and to accomplish it the way that Clive imagined required my unlearning all the traditional rules of story and composition. By its nature, Seduth was a more precisely constructed affair. Because we had this epic scope, yet only a single issue, the jagged, dreamlike presentation of the narrative - like a record skipping from major beat to major beat - and the exact framing and composition of the images had to be precisely planned and intricately described. I was far more involved in dictating the exact layout and paneling of each page than a writer traditionally should be... Then Gabe Rodriguez would come in and elevate the script to ridiculous heights. And since we were consciously aiming for that strange, surreal presentation, we were forced to use every element of the medium - plus the advantages of the 3D format - to propel us through the weirdness, to transition through narrative space; the consequence being that we never had the square footage for more dramatic grace notes or intimate character development.
"Here, however, we're telling a deeper, more straightforward narrative over eight issues. So where Seduth was about how much information we could fold into a single, artistically complex page, Hellraiser has the advantage of a longer, slower burn; more deeply developed characters; and exquisitely crafted, albeit simpler, layouts to heighten the horror. This is much purer storytelling, but what I think Seduth equipped me to handle was a better sense of pacing and transition. How to keep the story moving. A sense of when to fill the page with action, and when to let a single frame speak for itself. And really how to just get out of Leonardo Manco's way and let him work his magic. "

Revelations : "It's some time since you first spoke to us about your desire to write a Hellraiser story - given the options available to you, what convinced you to pick up this narrative at the end of Hellbound (Hellraiser 2) rather than at another point in the movie series?"

Chris Monfette : "Almost inarguably, everything after the third film is crap, and even the third film falters beneath the weight of what had already become a mainstream horror icon. There had been a handful of Hollywood projects in the last few years that I had geekishly, passionately wanted to pursue - the Nightmare on Elm St. remake, the upcoming Monster Squad reboot, and, of course, the Hellraiser redux... I had very specific ideas about how to make those franchises work, one of those being what will eventually become the endgame to these first eight issues of Hellraiser. So when Clive called to come aboard this project, my head had already been wandering the hallways of Hell, exploring my own semi-pro fan-fic... But I knew that the character of Pinhead, after decades of cinematic abuse, had simply become tired. I was weary, the fans were weary; the idea of another truly great Hellraiser film seemed increasingly, tragically unlikely. And it made we wonder about Pinhead's own ennui over those twenty-odd years, his own personal sense of demonic boredom - because he does, on some level, still cling to his human curiosities and ambitions. What if he wanted more? What if he saw Hell for the trap - the box - that it had become? And from that starting point came the idea that in order to escape it, he'd have to confront the one woman who'd truly bested him, and through that, we'd in turn see that Kirsty had also been spending these last few decades in darkness. "

Revelations : "You open issue 1 with a great quote about Hell from Gian Carlo Menotti and, in later issues, you draw upon quotes such as C.S. Lewis's "The safest road to hell is the gradual one - the gentle slope, soft underfoot, without sudden turnings, without milestones, without signposts." What's your own view of how the Hellraiser mythos might ensnare its victims?"

Chris Monfette : "Each issue of Hellraiser will open with a quote about the nature of Hell because, as Lewis says, we so often come to it unknowingly, unprepared. How often do we look up only to realize that we've stumbled into a bad situation, a terrible time in our lives, without the realization of how we came to be there? Because the steps are small. The path narrows. And while that's certainly true for Pinhead, I wanted to show readers how that has - and will - become true of Kirsty, as well. Hopefully, on some metaphysical level, the audience will take that same journey with us, not recognizing that each turn of the page takes them deeper and deeper into Hell. But we're doing it, at least I hope, through character this time... Hellraiser had its metaphors of subversion, of combating social taboos with its leather clad villains and intense sexuality; Hellbound pushed it further with surrealistic imagery that evoked Argento or Fulci; and this series - which I like to think of as the cap to that trilogy - hopefully finds a degree of its terror by exploring the more human horrors, by bounding off to Hell through human and inhuman hearts. Hellbound hearts."

Revelations : "What are your hopes for this series - is it an enclosed 8-issue series or the jumping off point for an alternative direction of the Hellraiser story?"

Chris Monfette : "I'll say this... The end of the series will offer readers a vastly different vision of Hell than we've seen before, and it'll leave both Kirsty and Pinhead in a place that should simultaneously feel like a finish and a beginning. For me, this has always been a torch-passing series for the readers, a place where one could lay the mythology to rest with some satisfaction, or where you could pull back the camera and explore an even deeper, more terrifying future."

Revelations : "How have you worked with Clive on the project and are there aspects you wrote that surprised (or particularly delighted!) him?"

Chris Monfette : "After Down, Satan!, Son of Celluloid, Seduth and a few other projects along the way, Clive and I have developed a collaborative relationship that's fundamentally about trust. Clive trusts that I respect his vision and can build upon his themes, his voice; and I trust that Clive's instinct is always to push the boundaries of imagination and challenge the audience, myself included. So to that effect, the process is very natural. I had a vision of the endgame, of connecting Pinhead's story back to Kirsty, and where Clive's initial outline was very, very different, he offered up the Harrowers, invented Cenobites, brought a number of themes and ideas to the table, and somehow we married those notions into something unique and original."

Revelations : "Whose idea was it to do an additional vignette outside the main story arc (it's a bit like one of the old Marvel Hellraiser comic books) and how did you decide on a topic for this prelude?"

Chris Monfette : "Boom wanted to give fans a flavor of what the series was trying to accomplish, a cost-free assurance to diehard fans that this is the classic version of Pinhead - Clive's Pinhead - and a teaser for new fans of the kinds of visceral horror to come. Because it's unconnected to the mythology we're developing in the series, we had the freedom to simply enjoy some bloody fun with the project as a one-off. I initially suggested a few potential set-ups - one in a 1950's S&M brothel, one in a bombed out German village post-WWII - but the image of an inmate sitting in an electric chair, brandishing the box, kept pulling at me... It was tremendous fun, and I'm hopeful that fans will enjoy it as a straight-up bit of gruesome fun."

Revelations : "What should we look forward to in future issues/projects?"

Chris Monfette : "As any Doctor Who fan might exclaim: "SPOILERS!" So I don't want to give too much away. But I can say that the next two issues will offer readers a handful of new - incredibly bizarre - Cenobites and that issue three will explore the origins of Kirsty's Harrowers while connecting very slightly with some of Clive's other mythologies. There's also a very subtle cameo in issue two that I hope fans will pick up on...
"As for myself, I have a film called Deep Cuts in development with a company called American Original. Jeff Katz (Wolverine, Shoot 'Em Up, Freddy vs. Jason) and his partner Rich Marincic are producing with an eye to film later this year or early next. It's a uniquely scary, incredibly bloody mish-mash of horror sub-genres as they ricochet and collide with one another during one terrifying night in New Orleans. We've got ghosts, vampires, slow moving zombies, fast moving zombies, hostel scenarios, cursed objects, undead serial killers, etc. all packed into a single film. I'm hoping it'll be a fun, visual, terrifying feast - or rather, a genre buffet - for horror fans. And as soon as we launch this issue of Hellraiser, I'm about to start scripting another project that'll examine the connection between horror and music. Susperia by way of The Ring. Very excited." 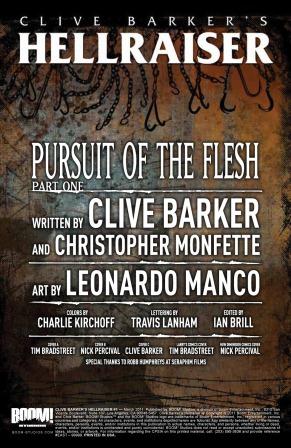 Issue one - available from all good comic retailers from 23 March 2011 or subscribe direct at Boom! Studios.

A gallery of cover art for the Prelude and other Hellraiser issues is here.