Featuring an introduction by Clive, July 2015 will see Tor Books publish an anthology of tales inspired by Clive's Nightbreed characters and following their lives beyond the events of the novella Cabal. Edited by Del Howison and Joseph Nassise, an open call for submissions was made and the final running order comprises 23 stories...

From the Advance Uncorrected Proof:Midian Unmade tells the story of the Nightbreed after the fall of their city, Midian. Driven from their homes, their friends and family members slain before their eyes, the monsters become a mostly-hidden diaspora. Some are hunted; others, hunters. Some seek refuge. Others want revenge... 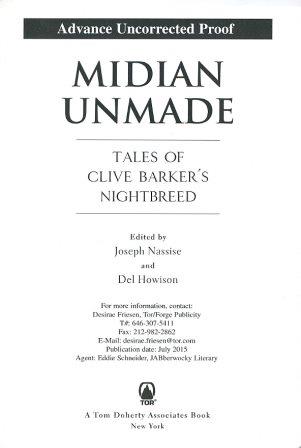 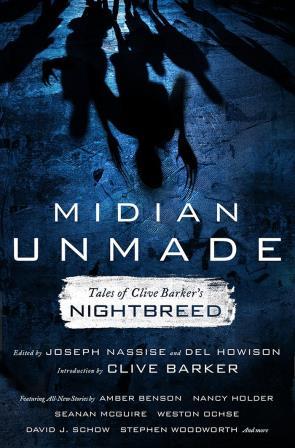 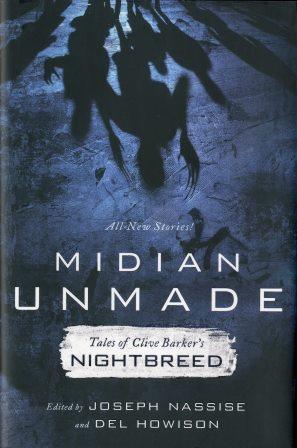 The original call for submissions ran:

Stoker Award-winning anthologist Del Howison (Dark Delicacies 1-3, The Book of Lists: Horror) and internationally bestselling urban fantasy author Joseph Nassise (Eyes To See, By the Blood of Heroes) have joined forces with horror Grand Master Clive Barker to bring you back to the city of Midian and the creatures of the darkness known as the Nightbreed!

Tor Books will be publishing MIDIAN UNMADE: TALES OF CLIVE BARKER'S NIGHTBREED in simultaneous hardcover and trade paperback editions in the fall of 2014 and we're looking for original horror and dark fantasy stories that fit the guidelines below.

MIDIAN UNMADE: TALES OF CLIVE BARKER'S NIGHTBREED We've all felt it at one time or another - that sense of unbelonging, of being isolated, possibly even shunned because of our differences; not for anything that we've done but for simply being who we are. We've all felt it - in childhood and adolescence, certainly, but even as adults as well, when the winds of change blow through our lives and we discover that those things we thought immutable are, in reality, anything but.

When this happens we all become like changeling children, at odds with those around us as well as with ourselves, looking to distant horizons for fresh comprehension of our purpose, sometimes even of our very nature.

The fiction of the fantastic literally overflows with metaphors for times like these, though none more so than the Nightbreed, those freaks and grotesques and shapeshifters extraordinaire that inhabit the hidden necropolis of Midian and make it their own in the pages of Clive Barker's CABAL. The Nightbreed are a colony of survivors, the last remnants of the once great tribes of the moon, and in their alienation they find a sense of togetherness, of belonging that often seems more human than those who bear that name.

Until the coming of Boone, that is, and the destruction of their hidden sanctuary, when they become outcasts once again.

MIDIAN UNMADE: TALES OF CLIVE BARKER'S NIGHTBREED picks up where CABAL left off, chronicling the lives of the 'Breed as they disperse into the world after the fall of Midian. We're looking for stories of struggle and despair, of hope and sanctification, as the former inhabitants of Midian try to adapt to the world from which they retreated years before. A world that does not want them. A world that will hound them, hunt them, simply for the crime of being different.

Writers have Clive's permission to use the existing members of the Breed that appear in the novella Cabal, in the film Nightbreed, and in the companion volume, The Nightbreed Chronicles, published by Titan Books. Writers also have the option of creating their own unique and fantastical creatures that fit the Nightbreed mold.

We're seeking original horror and dark fantasy stories. We pay five cents per word up to 5,000 words, with 30% paid on acceptance and the remainder to be paid after the complete manuscript has been accepted by the publisher. (Please note that this is work for hire project as Clive owns the world in which the project is set. Writers may use their stories in this anthology and have permission to use them in collections of their own works or in annual best-of anthologies, but they may not write and submit additional stories featuring the characters they create for this project to publishing projects elsewhere.)

Story submissions should be sent to either Joe Nassise (jnassise@gmail.com) or Del Howison (del@darkdel.com), using the subject line MIDIAN STORY ENCLOSED. If the subject line is not used, we cannot guarantee receipt of the story, as we will both be using email filters to isolate all Midian submissions from our regular mail. Stories should be submitted before September 30th, 2013

Questions can be directed to either of the email addresses above.

We look forward to hearing from you!

Because I've been asked a couple of times:

Standard manuscript format in doc or rtf, please.
Graphic violence, sex, or both are fine IF they are necessary for the story. Put them in simply to be gratuitous because this is a horror anthology and you'll get bounced pretty quickly.
We will be sending out all acceptance and rejection notices after October 1st, so please don't submit today and expect to hear back from us tomorrow. Take your time, write the best story you can, and then submit. You have nothing to gain by hurrying.
We are only accepting one story per writer. We will consider only the first story you send; all others will be circular filed unread. (Yes, we are keeping track of hundreds of writers to make sure there are no duplicate submissions)
As noted, we will pay up to 5,000 words. We have room for some longer stories, but ask for a hard limit to any story of 7,500 words unless previously approved by Del and I. (In other words, extremely long stories are reserved for those invited guests who are part of the project.)