She fumbled with the lock. But it refused to open; or else her hands refused to turn the key. She cursed them for betraying her.


Oops. We've drawn a complete blank on meaningful comment from Clive - or even passing reference ! 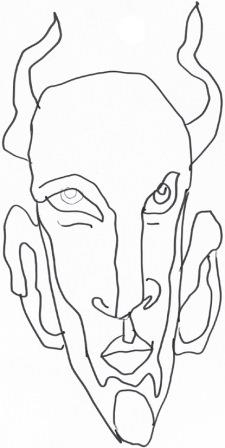 Stephen Jones (editor): "With each of the JFB [Jo Fletcher Books] anthologies we start out asking ourselves who would be the best artist to work on the project. That will also give me a clue as an editor as to how the book is going to 'come together'. I have also worked as a designer all my life, so I try to be very 'hands on' when it comes to the look of my books, and for the most part I think that has worked very well.
"To be honest, my initial suggestion to Jo Fletcher was that we should use H.R. Giger. A number of people were surprised that he was still alive and, in fact, he sadly died while the book was being compiled. It was Jo who actually suggested Clive. I had wanted a story by him anyway, and she thought that he would be a perfect fit as an artist as well. I agreed. We made an approach, and he accepted, and that was it."

Stephen Jones (editor): "Horrorology, as the title suggests, it is the study of horror. In the context of the new anthology, this forbidden knowledge is kept hidden away by an eldritch cult of Seekers after Truth in a vast depository called The Library of the Damned.
"When one of those unholy acolytes steals a sheaf of pages from an ancient grimoire known as The Lexicon of Fear, he unwittingly releases into the world the words that comprise the language of horror itself. In the book, some of these words manifest themselves in stories by such well-known authors as Clive Barker, Michael Marshall Smith, Joanne Harris, Muriel Gray, Kim Newman, Ramsey Campbell and Lisa Tuttle, amongst others."