In January 2008 Clive returned to Chicago to exhibit a collection of new artwork. The Packer Schopf Gallery was the stage for the Apocalypses exhibition which ran from 11 January to 16 February 2008 and included many oils from his upcoming Abarat books as well as a number of sketchbook pieces in pastel, acrylic and ink.
Continuing Clive's desire to allow as many people as possible access to his art, he took this tour around the gallery... 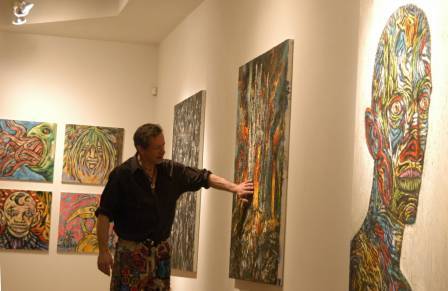 Visions Of Heaven And Hell (And Then Some)
Video Tour

Between 8 December 2005 and 28 January 2006, the Bert Green Fine Art gallery in Los Angeles hosted an exhibition of Clive Barker's artwork in various media including a small number of pieces painted for The Abarat Quintet and a number of adult and erotic pieces.
The exhibition was a huge success and went on to win the 2005 International Horror Guild award for art.
It was always Clive's intention to allow people who couldn't make it along to the exhibition in person an opportunity to see the works 'in situ' and he therefore took a video tour around the gallery towards the end of the exhibition in order that it could be presented here on the Revelations site... 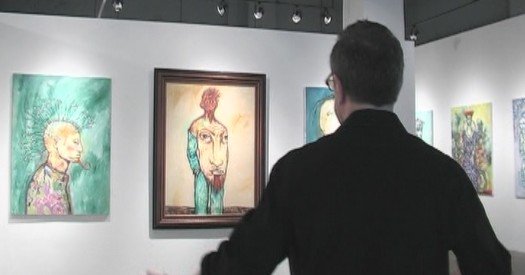 Click here for
Clive's video tour of Visions of Heaven and Hell (And Then Some)
at the Bert Green Fine Art Gallery, 26 January 2006.

Clive: "I really wanted for once for the title to mean something, you know, and for there to be pieces which, yeah, were a little hellish and pieces which were a little heavenly. And Heaven and Hell are always different to everyone who imagines them, but some of the characters that I've painted - there's a picture called Cosmic, for instance, which is a naked man who is piebald coloured, white and black and in the black there are stars. And that to me is very much a heavenly image - it's an image of a man who's totally at peace with himself, and who has, somehow or other, drawn the universe and the mysteries of the universe into himself... And then there are, as you say, images which are profoundly disturbing - and then there are pictures which I think are open to a sort of interpretation: the picture of the man amongst the bamboo...
"It's great! I mean it's a big gallery, it's four big rooms and one small room, and both Bert and I have a sense that we should give the big paintings a lot of space, but, with the smaller pieces, particularly the letters, for instance - the chapter headings - we've put all of those, all ten of those together on a wall and they look wonderful!
"And you'll see when I do this video for you, and I take you round, you'll see how it all plays out... So yes, I'm very pleased - I feel the gallery is really filled to its limit is the thing, if there is going to be enough space given to each painting, then it is filled absolutely to capacity. There isn't a single place I would put another painting."

Heaven, Hell And The Dreaming Space Between