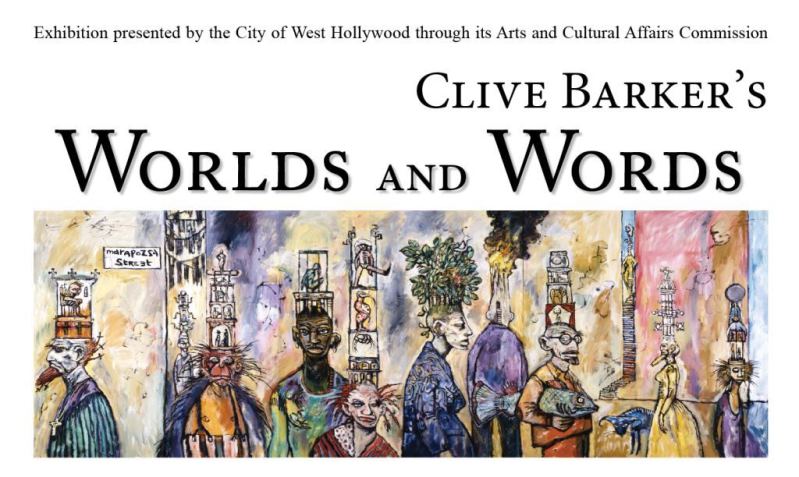 The West Hollywood Library exhibit will include Clive's artwork, hand-painted movie posters from Ghana, promotional material, personal photographs and handwritten manuscript pages that promise a glimpse into the processes involved in his writing. The display will run from 26 October 2013 through until 31 January 2014. Admission is free.

Clive : "I know that a great many artists are much more sociable than I am. I've always been happier in the hush of my writing room, or in my painting studio, than at a red carpet opening. But being a solitary creature has its dangers. Sealed up in a world of my imaginings it's easy to miss the news about where the stories I tell or the paintings I make have found fresh audiences. Then, out of nowhere comes word of something wonderful. I became great friends with an extraordinary lady by the name of Peggy, who has for several years now taught classes in the World of Abarat to her classes in Kodiak, Alaska. Peggy is a teacher of genius. Not only has she passed her passion for Abarat on to several generations of her beloved students, but she has turned them into creators themselves. They have enriched the islands with all manner of wild inventions. Games, historical detail and all manner of new myths and lore. On occasion I've Skyped or conference called with a hall full of Peggy's students, who could lead me with utter confidence around the world that had once been mine, but now, much to my delight, belongs to readers from China to Israel to Kodiak, Alaska.
"One of the most surreal discoveries can be seen at the exhibition that has just opened at the library here in Los Angeles: African posters advertising coming attractions to small villages in the Congo and Ghana. Two such posters, painted with great flair and power on sewn-together flour sacks, are on display at the 'WORLDS AND WORDS' exhibition. One depicts the Nightbreed, the other portrays Pinhead with a small human body crunched between his vampiric teeth. Normally they hang on the walls of Seraphim Arts, here in the Hollywood Hills, a constant reminder that tales of betrayal, redemption and hidden worlds where monsters live are universal ideas, and find audiences from the Equator to Alaska, all of whom embrace the wisdom of dreams."

For all the latest details of this event, head over to the City of West Hollywood Arts site
and click here for a gallery of original pieces in the exhibition.